François Viète was a French mathematician and Huguenot sympathizer. Trained in law, he became a member of the Breton parliament, then of the King's Council serving Henri III and Henri IV. He was proficient at deciphering secret messages intercepted by the French. Indeed, he was so successful that the Spanish accused him in being in league with the devil, complaining to the Pope that the French were using black magic to help them win the war.
Viète made great advances in several fields of mathematics, but always working in his spare time. Being wealthy, he printed numerous of his papers at his own expense. For a period of nearly six years in the second half of the 1580s, he was out of favour at court and concentrated almost exclusively on mathematics. In the 12th century, al-Tusi had found the same method of approximating roots of equations as that discovered by Viète. 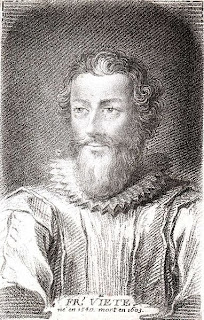